I Now Own a Chainsaw 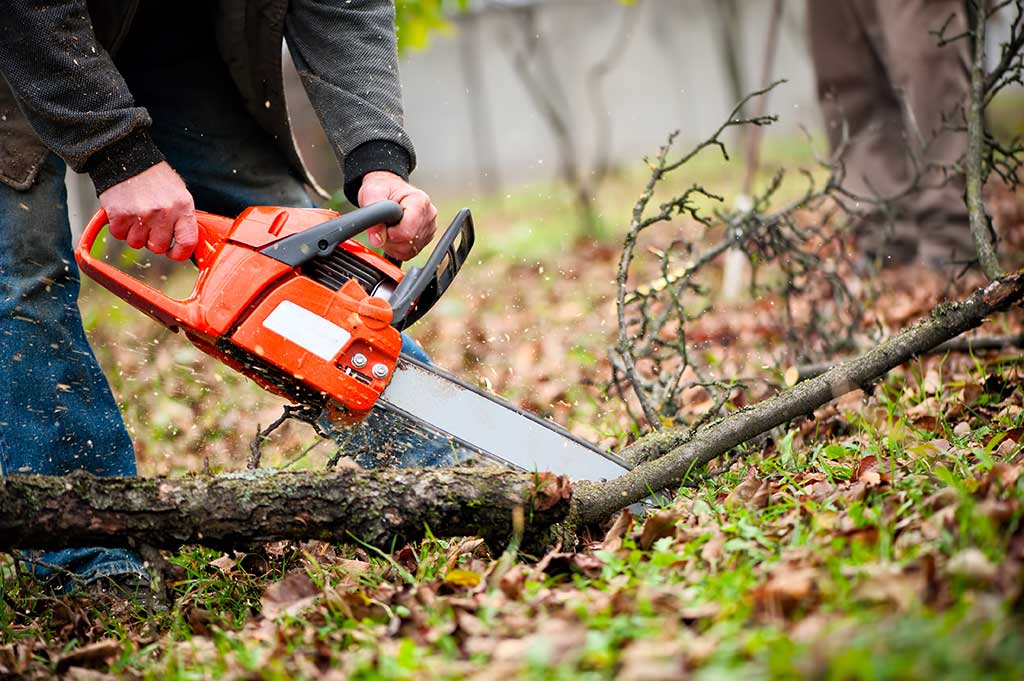 You’d probably think that I’d be happy … perhaps even excited about this, but I assure you I’m really not.

Sure, chainsaws are among the manliest of tools, whether you’re trimming back zombies on your lawn or sharks falling out of the sky or whatever, but this week’s purchase of said chainsaw wasn’t for anything even mildly amusing like that. In fact, I purchased my chainsaw this week – from Lowe’s Home Improvement for $99 – because I have some trees to trim around my yard and apparently just staring menacingly at them like I have been for the last three weeks just isn’t going to cut it.

I’m sure that owning a chainsaw recreationally would be kind of fun, but having a set task that I have to do … that my friendly neighborhood Homeowner’s Association would really like me to do … just sort of bleeds all of the fun out of it, so instead of visions of me running maniacally through the yard, taunting all of the neighbor kids who dared to defy keeping off of my lawn, all I see are those stupid trees that grow bigger and bigger every year…

No matter how much I cut, they just keep growing.

The chainsaw that I bought came with an instruction manual – that’s another way you can tell that I didn’t buy it for man points. Besides, if there’s one thing that I’ve learned as I’m growing older, it’s that I like both of my arms and a good way to keep your arms intact is to actually read the instructions when you buy an electric saw capable of cutting through them like butter at 10,000 rpms!

There were a lot of pictures in it anyways, so it really wasn’t that big of a sacrifice.

Unfortunately now that I more or less know how my new electric dismemberment machine is supposed to work, the next step is for me to actually go outside and use the thing, which means a combination of both putting on pants and getting up off the couch – neither of which I’m particularly a fan of. Not to mention lately the summer weather here in Florida has been a cross between blazing inferno and tropical tsunami, so it goes without saying that I’m not exactly amped to leave my perfectly air conditioned couch and wade through five inches of sweat to trim a couple of trees that I don’t like anyways in order to please some faceless organization that sent me a letter stating if I don’t trim my trees, they’re going to continue sending me politely-worded letters asking me to trim my trees until they have to come and cut them down themselves just to harvest the wood to make more paper to send me more letters!

In a way, it makes me reminiscent for the days when I didn’t own a chainsaw to call my own, so when I looked out the window and thought, “Wow, those trees could sure stand to be trimmed!” I could grimly tack on at the end, “…if only I had a chainsaw…” and everyone listening would think that I genuinely cared before going back to playing video games and everything else in my life that didn’t include such demeaning yard work.

But alas, that ship has sailed now and here I stand – a man with a chainsaw, desperately hoping that it will continue raining like the second coming of Noah’s Ark so that I can put off my chainsaw pruning a while long, despite the irony that such water is only going to make my photosynthesizing adversaries grow even more ferociously, each week towering higher and higher until one day I’ve got a Jack and the Beanstalk situation happening in my yard that’s really going to tick my HOA off!

The Humor Column has been published since 1999, currently spans 541 hilarious columns, and is visible from the International Space Station on a clear night.