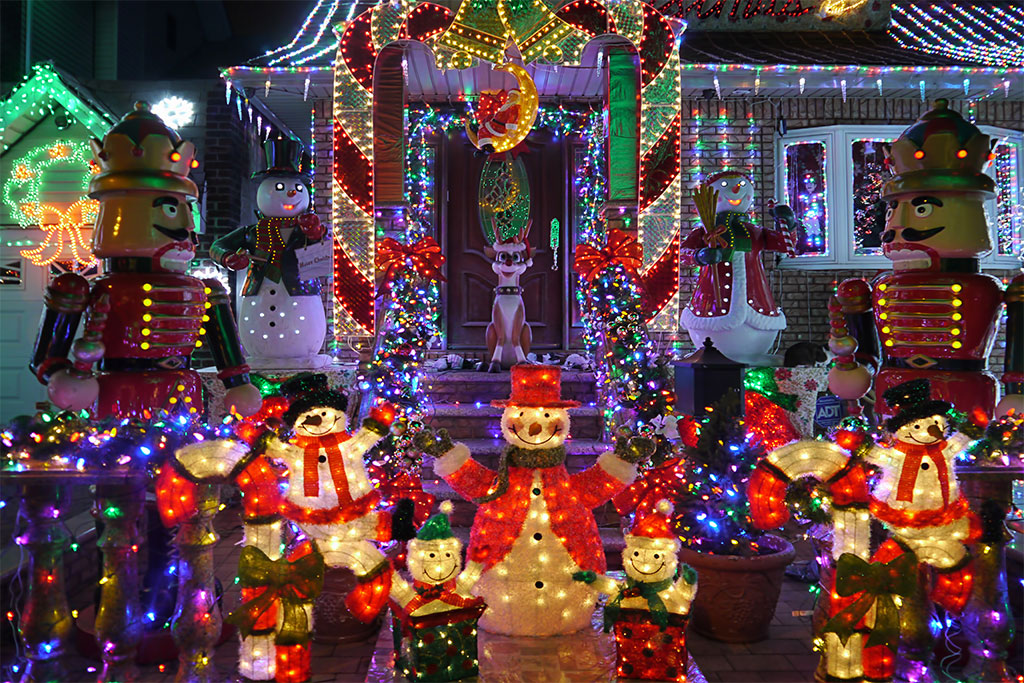 Some folks are out shopping today.

Others are still incapacitated from yesterday’s self-imposed turkey and gravy coma.

Let them enjoy their savings and their sweet dreams of mashed potatoes and pumpkin pie, though, because we’ve got our own objective this weekend while the house is quiet and the air is calm before the impending holiday storm creeps in … because Christmas decorations don’t put themselves up, my fine multi-color illuminated friends, and nobody wants to be that guy who’s still frantically trying to decorate his home on Christmas Eve in hopes that Santa won’t skip them over for more impressively decorated abodes…

I know because I’ve been that guy and it’s never a pretty sight to find yourself scrambling through the desolate remains in the holiday lighting section of your local superstore, with your only choices at that point being a ratty, already opened box of icicle lights and a full shelf of those ridiculous inflatable outhouses because even rednecks need their Christmas decorations, too!

We have a rule in our house – and by we, I mean that my wife has a rule in our house – that holiday decorations aren’t to go up, or nary even be spoken of, until after Thanksgiving, which means that already we’re behind schedule compared to all of the stores that’ve been casually sneaking red and green housewares and pre-decorated Christmas trees onto their shelves since roughly August. Back when I lived in the frozen wasteland of Northern Michigan, I would actually start putting lights up in September, though admittedly most of that ambition was merely to avoid trudging around in subzero temperatures and going up on the roof once it had been transformed into a veritable slip and slide of snow and ice…

Thankfully now that I live in sunny Florida, I can wear shorts and flip-flops the day after Thanksgiving and I’m still to beach standards considered overdressed for the occasion!

So now is the time for us to channel our inner-Griswold as we dig those overflowing boxes of holiday delight out of crawlspaces and garages throughout suburbia, donning our sunglasses and cranking up the Christmas music to a moderately reasonable volume as we strive to illuminate our homes to the point where passing planes might mistakenly think that we’re part of the airport and thus ensure that the boys down at the electric company will most certainly still receive their Christmas bonuses this year.

I may not be a fan of heights, but I’ll take the risk of falling off the roof vs falling prices any day.

And though I love me some pumpkin pie, give me twinkling lights over pumpkin spice even with an extra dollop of whipped cream.

‘Tis the season for dancing lights a’plenty up and down every lane, street, and boulevard – so many that the neighbors have to buy special blinds if they want to get any sleep at all during the month of December while your house shines like a beacon for all that is jolly and bright, for a man’s decorating job isn’t truly done until his house puts out more light than our sun high in the noonday sky.

…but far more colorful and festive, of course!

So gather your extension cords and your tallest of ladders, my band of manic merrymakers, for we’ve got eaves to illuminate and halls to deck, golden stars to hang and mistletoe to also hang … wink wink … because our time is now and this season just wouldn’t be the most magical time of the year without our incredible efforts filling the streets where we live and play with tens of thousands of dazzling lights and smiling snowmen and towering inflatables as far as the eye can see.

Ain’t no way that we’re missing out on any visits from Santa due to low visibility – that’s for sure!