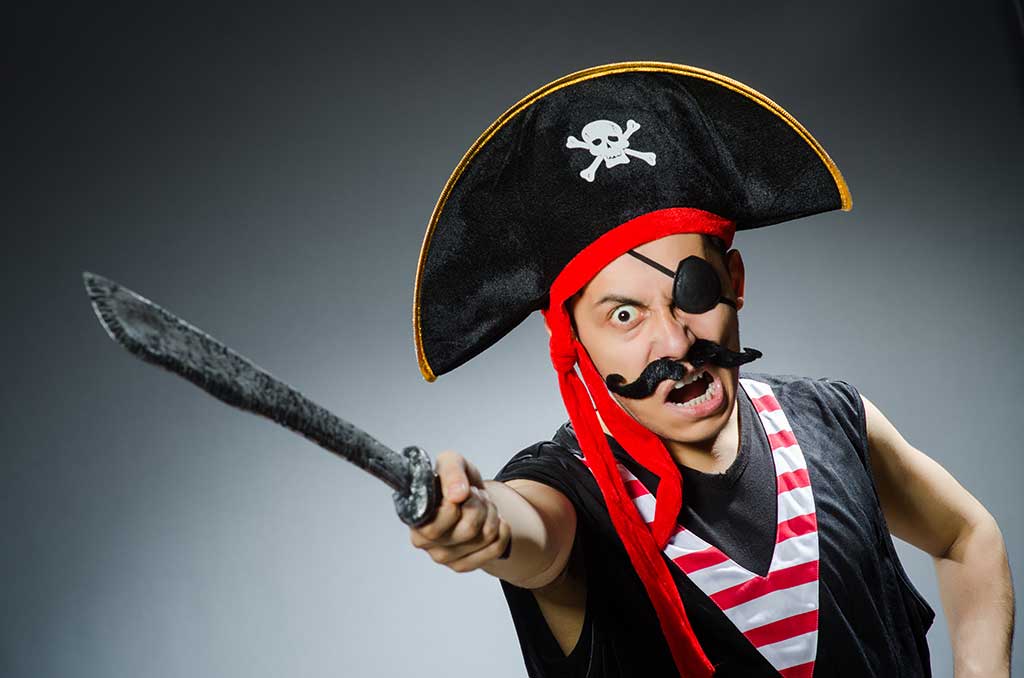 Few guys other than Johnny Depp can really pull off the pirate look, and I’m still pretty sure that even he goes through at least a bottle of rum a day just to ensure that he stays in character, if you know what I mean.

So why was I recently sighted running around wearing a billowy shirt that revealed entirely too much chest hair and a pair of those poofy pirate pants that are noticeably absent of pockets for hauling around one’s pirate booty???

Because I’m a Dad now, and dressing up for Halloween with your kid is what you do…

…or at least that’s what I was told by my wife … repeatedly … until she finally just ordered my costume for me and said, “You’re wearing it!”

There was a time when I used to love getting dressed up for Halloween – I would go as a Ghostbuster or a giant M&M or the ever-paperclip-centric Bert from my beloved Sesame Street, and in those clever disguises I could roam the neighborhood completely unrecognizable as I gathered enough candy and sweets to last me until Santa came to visit! Of course, that pretty much ended when I turned 16 and got a job which even at minimum wage for sweeping floors provided me with more than enough to go to the store and basically buy whatever candy I wanted all by myself.

One of the many spoilers of growing up is realizing that you can actually just buy things yourself instead of running around begging your neighbors to drop them into your pillow case in the middle of the night.

But of course, with my own son being only one and a half, he doesn’t even eat candy just yet, and so instead the real incentive for him to enjoy Halloween is found in dressing up like one of his favorite characters and running around so that people can say, “Oh – look at the adorable, little pirate!” without them pinching the hell out of his cheeks for one month out of the year.

In that right, I can’t hardly blame him … I’m not exactly a fan of getting my cheeks pinched, either, but when I realized that I couldn’t just be that parent who walks behind him, not dressed up like a pirate when for the most part I’m now a mature adult, needless to say I had some concerns, such as “What if I look ridiculous?” and “Seriously, how could I not look ridiculous wearing that?!”

Or even heaven forbid, “What if I need to stop and get gas when I’m dressed up like that?!?!?!”

Which in fact most definitely did happen, though without incident, leaving me wondering if pirate pants are more trendy and prominent in today’s society than I ever realized, but an even more significant revelation came later on that pirate-permeated evening when I surprisingly came to learn that despite feeling ridiculous in all of my pirate garb alongside the rest of my pirate family, in that very moment I was actually somehow bizarrely cooler than all of the guys walking around me not wearing pirate attire whom I had previously envied!

Mind you, this kind of thing never happens to yours truly, and yet for a precious few hours I found myself magically transformed from ridiculous guy dressed as a pirate into “See, that guy dressed up for Halloween with his kid!”

…which you probably wouldn’t think the random comments of complete strangers would be much of a motivator, but I spent the rest of the evening walking around as if I actually had consumed an entire bottle of rum … at least in spirit, mind you!

The moral of this story is that although dressing up like a pirate will most certainly make you look ridiculous, it will totally gain you points with your wife and your kid and even complete strangers who happen to be married to other guys who are party-poopers with regards to wearing poofy pirate pants in public.

…as long as we’re still talking about Halloween, mind you. The rest of the year, don’t push your luck!