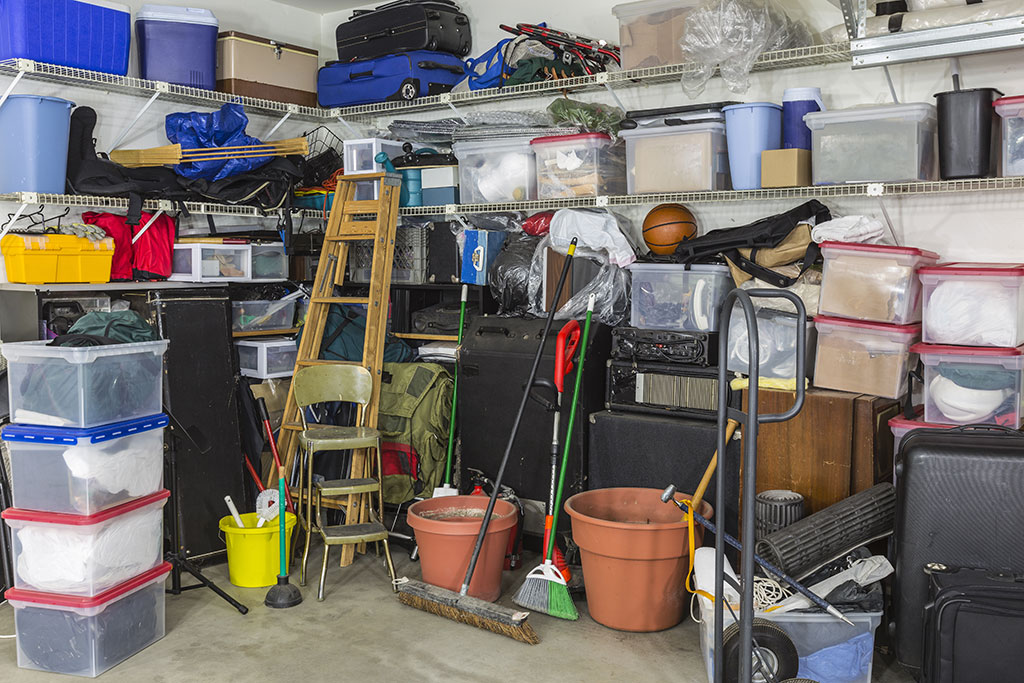 Ten years ago I admittedly wasn’t the biggest fan of suburbia, with its rows and rows of houses that all look exactly the same, and the SUVs and minivans lining every driveway, and the kids…

Oh, so many kids!

But then again, I was still in my twenties so in retrospect maybe it was primarily the kids because here we are now a decade later and not only do I live smack dab in the middle of suburbia, but I actually kind of like it here, too! The houses all looking the same means I don’t have to live next to the guy who decides he’s going to paint his house pink just because, and as for the SUVs and minivans … well, you’d be surprised at how many of those kids you can’t fit in the backseat of a convertible.

That said, the suburbs aren’t entirely perfect, and if I had to pick just one flaw – say for the sake of writing a weekly humor column, for example – my biggest complaint about suburbia would have to be the lack of storage.

Because we basically have none.

If you’ve ever wondered why you see cars in every single driveway while you’re driving around suburbia, it’s not because we’re copious The Price is Right contestants and are all lucky enough to have new cars coming out of our ears! Since I moved to my first house in suburbia with its 42.5 square inch front lawn, I don’t think I’ve ever met somebody who actually parks their car inside their own garage … because instead every garage in suburbia is filled with boxes and bags and holiday decorations that could otherwise be stored indoors, but not in suburbia.

Back when I lived up in Michigan, we had these magical things called basements that were basically like a whole nother house for you to store all of the extra crap in from your regular house. Sure, they got a little dank and moldy, and in the wintertime – which was thirteen months out of the year – they had a tendency to turn into these dark, windowless ice caverns where you were never sure if you were going to wake up in the next morning, or if you did, you wondered whether you’d be staring down the business end of a polar bear if you did…

But the storage space was second to none!

Unfortunately you can’t build basements in Florida because swamp water and alligators tend to be unusually harsh on a family’s knickknacks and Christmas decorations. And driving the 1,382 miles back to Michigan just to store things in my Mom’s basement at this point seems inefficient at best, so instead here I am stuck stacking boxes upon boxes of all the things I’ve ever owned, but don’t have the heart to pitch out because I haven’t touched them in the last five years until my humble garage is just about bursting at the seams with old college textbooks and inflatable Santas and tools that I’m honestly not sure I even know how to operate.

…not to mention the fact that we’re trying to add two more kids to a house that for the last several years has been just fine without two more kids, and all of the miniature baggage that they will need stored as well…

Where all of the stuff is supposed to go, I have no idea!

Maybe if Florida is too ill-equipped to have basements, instead we could just start selling our suburban homesteads in pairs so that you’ve got one house to live in and a second one next door to accumulate all of your crap, err, I mean priceless treasures from over the years!

Or maybe I just need to have a garage sale … as in, sell the entire garage – for one low price! … and then start over fresh with an empty garage and a clean palate waiting to be filled with new worthless treasures of every shape and size and color and odor!

If I were to casually leave a box or two of random knickknacks at lost and founds at the grocery store or the local library, I wonder how long I would have until they finally caught onto my sneaky storage scheme and kicked my hopeless treasures to the curb???