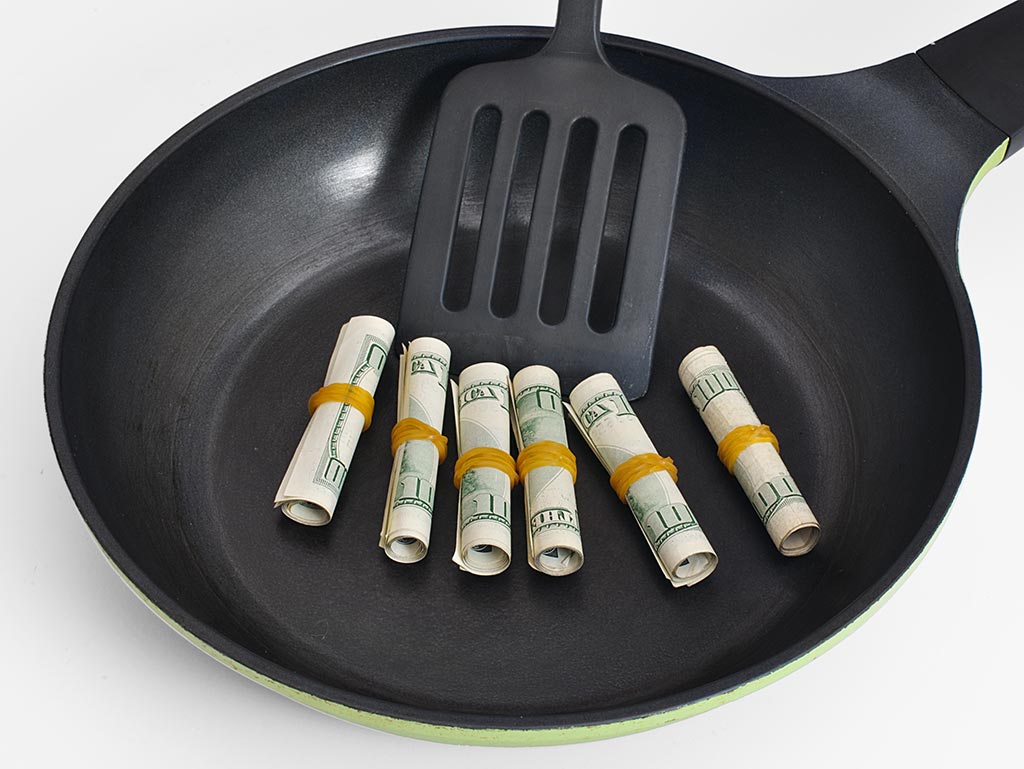 It could be said that already I’m a guy who’s written too much about cookware – namely because this isn’t the first humor column that I’ve penned about frying pans, but guys, I’m getting older and of the growing list of questions that I really need to start finding answers to, the frying pan question seems to have bubbled and flaked its way noxiously to the top of the list…

Because seriously, how much does a guy need to spend on a frying pan to get one that’ll last more than half a dozen pancakes?!

I mean, I get that I’m not a college kid anymore, so it’s time to move my shopping preferences away from Walmart’s $1.99 Barrel ‘o Pans and find something that’s a little more durable … a little more reliable … perhaps even a frying pan that won’t threaten the lives of my family – which now includes children – by flaking off little bits of whatever miracle chemical they coat onto the bottoms of these things under the guise of teflon, but let’s be honest, it might as well just be extra flavorings for your eggs and bacon for how long it actually manages to remain a part of the pan and not a part of your intestinal tract.

So the other day after doing my fatherly duty of picking the largest of these killer pan particles out of my son’s scrambled eggs that he never really had any intention of eating anyways, I decided to do a bit of shopping around to broaden my horizon with regards to The American Frying Pan Market, circa 2017.

I found myself in a store that rhymes with Jillian’s Glaucoma, but unless some sneaky prankster had recently managed to make off with every decimal point in the place, their prices seemed a bit steep even for a guy rolling in humor column money like yours truly is fortunate enough to brag! I’m sure if I had asked one of their kind employees, they probably had a picture of a frying pan that I could’ve purchased for a more reasonable price that still would’ve been less likely to flake off unhealthily into my family’s food, but nonetheless it was still a tad disheartening to learn that:

Then again, I suppose that we all choose the priorities in our lives, despite the scathing notion that my own have regrettably slanted towards car payments and student loan interest rather than indulging in the luxury frying pan lifestyle that we see all of the celebrities enjoying on TV. Not everyone can drive around in Maseratis and drink Dom Pérignon by the boxful while our pancakes are miraculously contaminant free and generally safe for human consumption like we’re all Oprah or something!

Perhaps one day, once scientists have managed to bring the costs down on clean, renewable energy and fresh drinking water pours from the taps of even the most forgotten of small, post-industrialist American towns, then our brightest minds can turn their attention to this whole expensive frying pan situation and bring an end to the chemically-garnished cancer cakes that I’ve been haphazardly serving out of my own kitchen thanks to the sheer laziness and greed that has been brought upon the American people by the Big Frying Pan fat cats.

Maybe one day my grandchildren will pass down to their own, these secrets of the perfect frying pan, and nevermore thereafter will child and adult pancake-lovers alike utter the words, “Yuck … what is that???”

“Fine – whatever. Then can you pass the syrup again, please…”