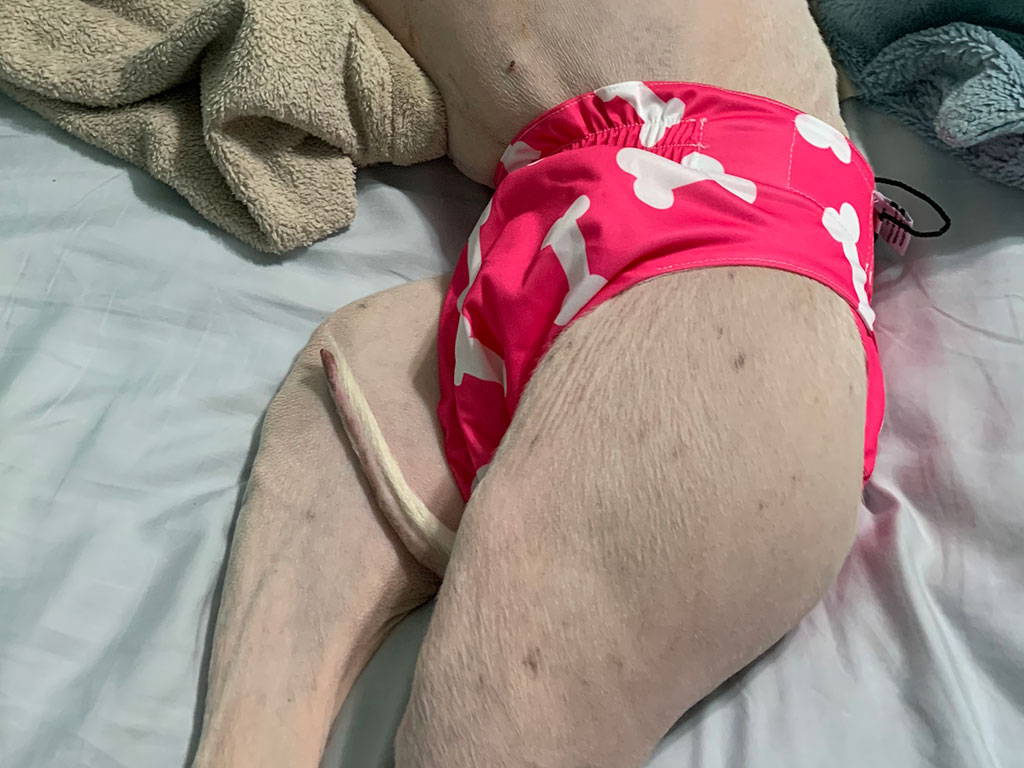 I shouldn’t laugh, but my dog started wearing diapers recently.

Oh, who am I kidding?! After 56 dog years of defiance and obnoxious barking coupled with a questionable amount of occasionally being a good girl, it seems that what goes around has finally come around … with going specifically referring to going to the bathroom because if we have one rule in this house that is rigorously enforced, no going to the bathroom on the floor has got to be it!

I mean, I suppose I feel sorry for her … a little bit … because she certainly isn’t getting any younger, though of course so am I and you don’t see me peeing the bed at night and all over the living room floor during the day…

…at least not yet, anyways…

When my wife first suggested suiting up our dog with Pampers much in the same way that we still do with the majority of our kids to avoid making the washing of their bedsheets a daily occurrence, I could only assume that she was joking. I know that they make a lot of ridiculous things for dogs – hotdog costumes and roasted turkey-shaped toys, as if that’s the kind of play one wants to encourage – but needless to say, diapers with dog bones on them wasn’t something I ever expected seeing in my Amazon cart.

Mind you, it usually wasn’t my side of the bed that she was peeing on in her sleep, so it wasn’t really my place to do much more than submit the order and then snicker at my dog’s expense each and every time she’s required to suit up before going to bed.

Because as you can see above, she looks absolutely ridiculous in them. And I think she knows it, too, judging by the way that she simultaneously hangs her head and raises her butt defeatedly when I announce that it’s time for us to go to bed. Occasionally she’ll still try to fight it and plant herself into the covers defiantly as if there’s a chance that we might let her sleep like a dog with a normal bladder again for just one night … but we won’t, and so on goes her comical velcro underwear and reluctantly she accepts defeat, and only then can we all go to bed without worry of being flooded out in the middle of the night.

I think dealing with their bathroom habits is probably the worst part about having a dog.

And when they steal food off your plate.

And bark incessantly when you finally get the kids down for their naps.

You never have to think about putting diapers on a goldfish, or a hamster waking up your kids, though admittedly both of those options are difficult to cuddle with for an extended period of time!

The hard reality is that we all grow old over time – that’s kind of how time works – and even though someone can’t make it through the night without those dreams of gushing waterfalls and running streams trickling into the real world, that doesn’t mean it’s time to trade them in for a shinier, newer model pet that just swims circles in its tank all day and is physically incapable of ever stealing food from your prized dinner plate…

A bit of gentle mockery, of course, is definitely in order, but otherwise she’s still our same, old dog who grumbles amusingly when you tell her to scoot over in bed and goes amusingly ballistic when you throw food away that as far as she is concerned would’ve been otherwise destined for her mouth.

As the old saying goes, you can’t take the sass out of the old dog, but you can velcro a diaper to her butt to prevent her from peeing all over your bed.