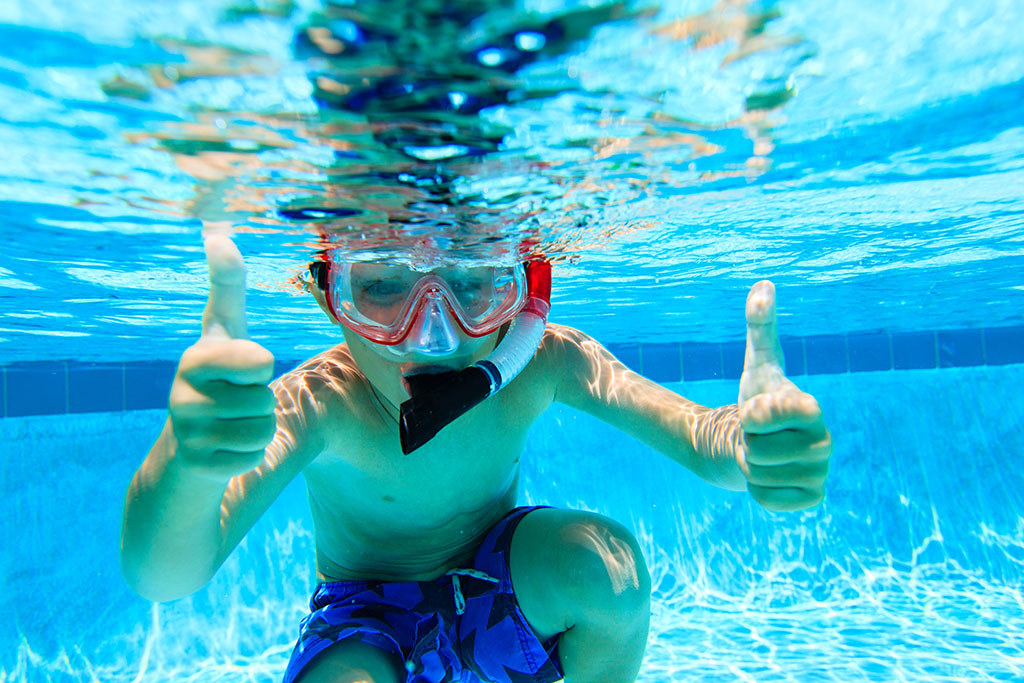 What better summer learning experience is there than teaching my boys how to snorkel?

Long, long ago when I was much younger and marginally less wise, I spent some time SCUBA diving and snorkeling and even considered pursuing a career as a marine biologist until I realized how much of their time was spent writing boring, scientific reports and not just playing fetch with the dolphins and whales all day.

Nonetheless, one of the great aspects of having kids is revisiting all of those fun things that you eventually gave up to the demands of adulthood, and so considering that my kids have already been taking swimming lessons literally since they’ve each been six weeks old, it seemed only fitting that the next logical step was to stuff a breathing tube in their mouths and take them exploring for tropical fish and sea turtles and definitely not any sharks because they’re far too young to be paranoid about looking like a tasty seal from underneath by a hungry mouthful of razor sharp teeth…

Besides, even before I dare to take them out into the open water for some proper snorkeling, I’m already finding that there are plenty of things for me to teach them right here in the safety of the shark-free pool in our own backyard that are important for them to learn. There’s basic pool safety like don’t jump on your brother’s head like you’re Super Mario and he’s a lowly Goomba when you’re diving into the water and don’t call your brother a Goomba anyways because he’s really sensitive about things like that.

And don’t swim between your Dad’s legs without giving him a heads up first, and for god sakes don’t come up early because even though he’s not giving you another sibling at this point anyways, it’s still not a good way to stay in his good graces!

They get to learn fun things like you can spit in your mask to defog it and important caveats like spitting in our brother’s face “to help defog his mask” is not doing him a favor.

Lately we’ve been practicing diving for things at the bottom of the pool, which is nice because it A) helps to tire them out real quick, and B) has put a nice end to excuses for not picking up all of our pool toys when it’s time to go inside. And for me, I’ve found that it’s great exercise because not only am I giving my lungs a workout and remembering how to swim and dive all over again, but just keeping track of three kids on land is a feat – when we’re in the water and one could be getting eaten by a shark at any given moment, it’s really good at keeping me on my toes, which is apparently great for my heart rate!

While they may be hyper four and seven year-olds in our own backyard now, I’d like to think that they might just slow down for a bit of that awe and excitement once they find themselves swimming amongst real, live fish out in the Gulf of Mexico for the first time and can admire the delicate coral beneath their feet as they float gracefully through the warm water without punching or kicking at one another for as long as several minutes!

Nature has that way of transforming even the craziest of us … at least until we find ourselves staring down the teeth of a real, live barracuda and come to realize that underwater, only your dive buddy can hear you yelp…

Whether I’m able to make SCUBA divers or even boring, old marine biologists out of my kids remains to be seen, but in the meantime we’re definitely finding snorkeling at home to be a good way to work out some of their vast reserves of energy that seems to accumulate at a rapid pace over this seemingly endless summer vacation, and in between learning not to grab onto each other underwater and letting their brother go for the dive sticks once in a while himself, I think we’re all still having a lot of fun, too.

Granted, every swimming afternoon at our house still regrettably ends with the naked boy dance afterwards during the drying off process which I’m frankly less than fond, but that’s a story for another humor column…