Moving can be a really stressful time.

One minute you’re packing up your worldly belongings into cardboard boxes, wondering if everything’s going to fit, the next you’re trying to unpack all of that same crap into your new home, even more convinced than ever that there’s no possible way it’s all going to fit! And if you’re anything like me, it’s when you find yourself sitting on the floor of your new kitchen at three o’clock in the morning, surrounded by mountains of Tupperware without a single inch of cupboard space left to spare, that something finally snaps inside and you do what any mature, self-respecting adult would do in a stressed out time such as this…

You build the biggest, most awesome fortress out of durable, plastic storage containers that suburbia has ever known!

So that said, without further ado it would be my distinct honor and pleasure to welcome you to … Tupperware Castle. 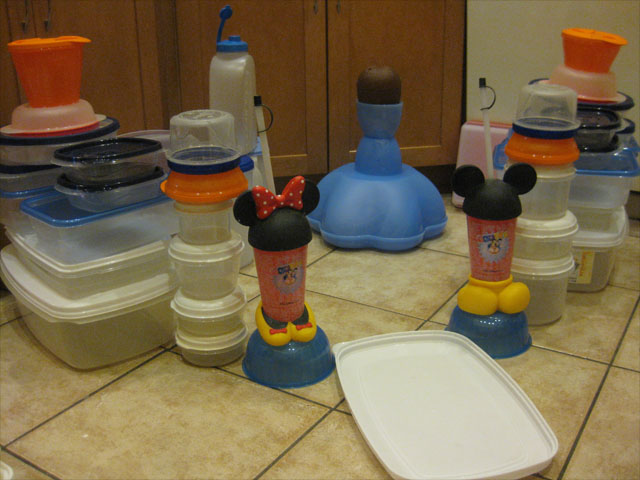 Originally fortified in the spring of 2011, these mighty walls serve as a key stronghold in the culinary region of the household motherland, protecting the food supply and enforcing good order throughout the entire refrigerated foothills that surround this proud, majestic land.  Taking a special interest in foodstuffs of the leftover variety, its iconic plastic blockades lead a noble tradition of keeping odors out while also locking freshness in, and ultimately ensure that its people fear not of the evil mold men and bacteria beasts that have been known to ravage less prepared villages in the neighboring kingdoms.

Between towering spires of sandwich containers and soup bowls that look out across the land in all directions and a series of stalwart lemonade pitchers of sizes both large and medium to act as the barracks and armory for those who live to defend the sanctity of nutrition as we know it, Tupperware Castle boasts a ironclad defense that only the most foolish of contaminants would even dare to challenge.  Of course, it’s not all military precision within these walls, for our generous ruler also saw fit to build for his people a magnificent punchbowl reception hall that’s known for hosting everything from festivals and celebrations to even the Queen’s own Royal Galla, during which only the most prestigious nobles are invited to don their decadent ball gowns and dress uniforms for a magical evening truly unlike any other!

A brilliant design only conceivable in the wee hours of the night, it should come as no surprise that Tupperware Castle is certainly not without its critics – namely, anyone who’s tried to walk through my kitchen in the last week and found themselves tripping over Tupperware armaments and other random support structures. From a purely strategic perspective, it’s been a very nerve-wracking period because I’ve had to rebuild the left flank three different times now, thus leaving us wide open to attacks from the dining room region to the west while we scrambled to sure up the outer walls until more holiday cookie containers could be unpacked!  And while I’m thankful to say that we were eventually able to get the perimeter back up to its defensive intentions, ultimately I still fear that it’s only a matter of time before the inevitable happens and a wrath of god (wife) strikes down from the heavens, righteously banishing these plastic fortifications that ensure our safety back to the cramped cupboard spaces in which they were originally intended to belong…

… even worse yet would be if she orders me to do all of the dismantling and putting away myself!

Of course, until that day is here upon us, though, let it be known throughout the far reaches of this great land that fuzz balls, slime creepers, and other imaginative, yet distinctly gross refrigerator mutations stand little chance of penetrating this legendary fortress known proudly as Tupperware Castle. Protecting everything from cookies to casseroles to even the occasional random vegetable, mark my words – as long as these plastic walls stand strong, they will continue to fight … for flavor, for freshness, and for the preservation of leftovers just as long as they remain recognizable!