What I Did on My Summer Vacation – Homemade Potato Farm Edition

Vegetables have always been a curious bunch to me.

Like most, I never really trusted them as a kid, and it’s only been in my slightly more mature adult years that I’ve reluctantly learned to tolerate these strange edibles from the ground as they make their cameo appearances on my dinner plate.  I’m still not much of a fan of green beans, which my Mom will vouch I used to try and hide in my glass of milk between the ages of roughly six through fifteen, but potatoes, corn, and believe it or not even broccoli – all of these and more vegetables have since been welcomed onto the plate of the kid who literally couldn’t have been paid to eat them growing up!

Still, despite an acceptance that I never would’ve believed possible back in the days when I was knee-high to a grasshopper, there’s a lot I don’t know about vegetables.  I mean, at least apples and oranges have the decency to grow hanging on trees in plain sight, but so many vegetables grow underground or out of sight – who knows what they’re doing when they’re down there?! If you ask me, it’s something that really needs to be looked into, and since yours truly happened to have a bit of time on his hands this summer…

It all started back in June when I happened across a lone potato that had strayed from the pack and was lying abandoned on our pantry floor.  Having gotten to that weird point where roots were starting to creep out of it, I certainly wasn’t even about to entertain trying to eat it, but at the same time I saw an intriguing science opportunity instead of merely throwing the thing in the trash like an old, unwanted potato.  What would happen if I actually encouraged those roots to wander forth, offering them the water and sunlight that that they weren’t likely to find locked away in our kitchen pantry?  Would I wake up one morning to find a veritable horde of potatoes growing in my little makeshift potato farm, or would my science experiment flounder, thus leaving me even more bewildered about these peculiar vegetables than ever before?!

Either way, there’s really no way in hell that you’d ever catch me doing actual physical labor on a real potato farm, so trying my hand at home was pretty much the closest I was going to get!

And truth be told, even without all of the shoveling and hoeing that I can only assume would normally be involved, growing potatoes is actually really hard work! Granted, I didn’t even use dirt, instead attempting to recreate some sort of hydroponic system that I kind of just made up as I went along, but you’ve still got to remember to water the thing on a regular basis and the lack of houseplants around this place might suggest that historically I haven’t exactly been what you might consider reliable in that particular sense in recent years.  It did have sunlight a plenty, although frankly I’m not sure why that even matters, seeing as potatoes usually grow underground anyways, but hey, sunlight is free and once in front of the window, there wasn’t anything I had to remember for upkeep, so why not?!

So as the days turned to weeks and the weeks then into months, my little, mutant potato continued to sprout and grow, eventually creating not only a huge mass of roots, but also a variety of green thingamajigs that in no way whatsoever actually resembled other potatoes in any stretch of my already quite vivid imagination.  Still, I held my hopes high and remembered to keep the manifestation watered more or less semi-regularly, which is honestly better than expected in my books, and sure enough, at the end of a long, three-month potato-farmin’ period, I had myself…

Well, I guess I still had the original potato as well as the new roots and other random green things, but as for actual potatoes that I could either eat or even neglectfully forget on the pantry floor and then subsequently transform into even more potatoes – nada.  It was like Mother Nature and my minimal, assumption-based knowledge about agriculture had failed me, leaving me with only a slightly-moldy potato and some rather unpleasant smelling leftover root water for my troubles.

As my haphazard, little science experiment came to a close, though, I realized that I had learned one important lesson this summer after all – namely, that potatoes are magic, and when it comes down to it, really no one knows where they come from or how they actually grow into the baked potatoes and waffle fries that we all enjoy today without a second thought.

In fact, it’s actually probably better that nobody really knows how potatoes work because from what I’ve heard, they’re just a gateway vegetable to other mysteries like carrots and brussel sprouts and even green beans, and trust me when I say that there isn’t enough milk in the world to cover all of those up! 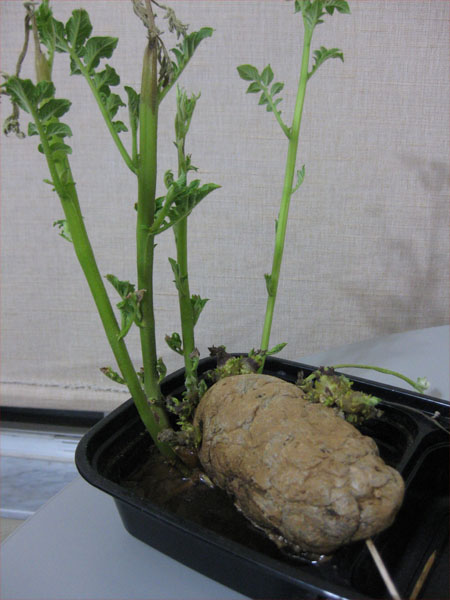