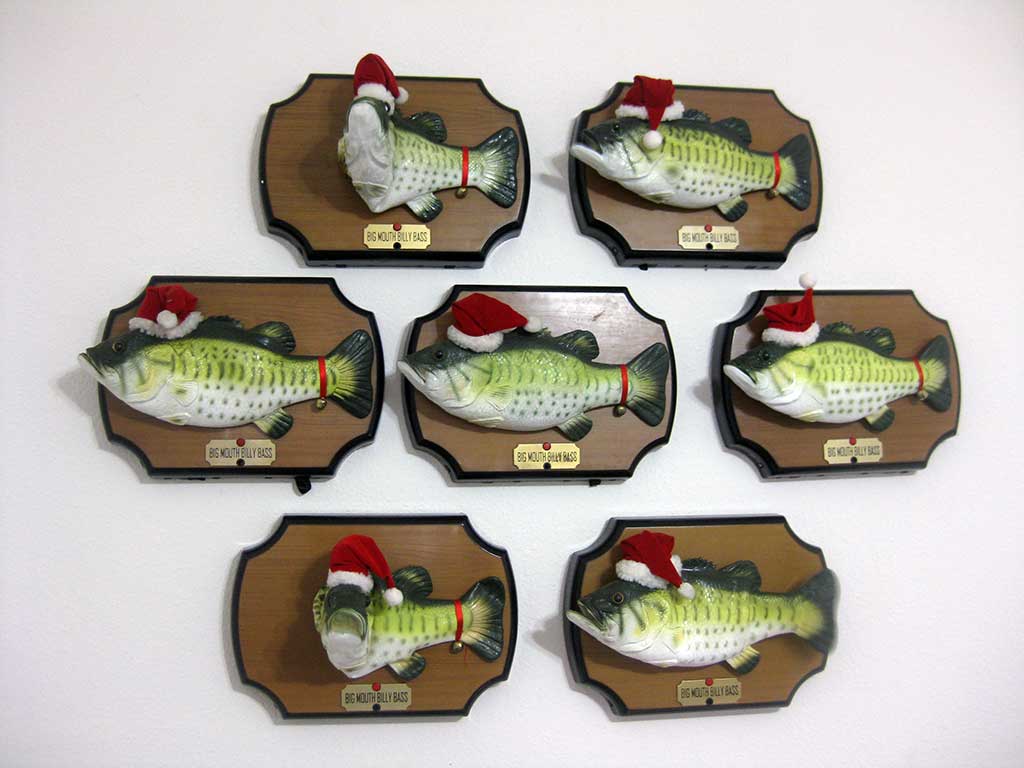 The year was 1999, and the world was in desperate need of singing fishes.

It had been 25 years since Al Green’s Take Me to the River had graced the airwaves and the last place anyone would’ve expected to hear those smooth tunes was out of the mouth of an animatronic bass underneath the tree on Christmas morning.

It was like a match made in heaven, and thus the infamous Big Mouth Billy Bass was born!

As bass fever swept the globe, everyone who was anyone had gotten one of these simple, majestic singing machines as the gift that kept on giving … provided he remained fueled with a steady stream of AA-batteries, of course. Many were bought as gag gifts, others purchased as a sound investment in ’90s pop culture that would no doubt pay back in dividends when singing fish supplies would inevitably dry up to pave the way for whatever holiday gimmick was next in line – presumably some sort of strange, digital pets that would prove to be even easier to neglect than real live ones…

They say that all good things fade away with time, but this was one fish that wasn’t quite ready to retire just yet.

These days you may not be able to find Big Mouth Billy Bass on the shelves of your favorite shopping establishment, but you can most certainly find him on the digital shelves of eBay – a feat that I recently confirmed by procuring no less than one dozen of these caroling crappies in order to spread a scaly bit of holiday joy throughout my extended family to ensure that each and every one of them found themselves with a happy, holiday fish to unwrap on Christmas morning.

As you might expect, the sight of so many singing bass – all dressed up in their holiday best – was perhaps the most magical thing I’d ever seen in my life, but of course before I could wrap and box each of them up to go their separate ways to Christmases in the far corners of the globe, it was only fair that I first allow the Billys Bass to do that which they do best.

As they also say, you don’t gather the choir without giving everyone a chance to SING!!!

Now for anyone curious about assembling a holiday choir of singing, animatronic fishes of their own, I do have a few friendly pointers that I should probably share with you about now. Needless to say, organizing one’s fish choir is something that is best done quickly, not to mention something that is best done while your wife is away at work as mine just so happened to be on this festive occasion…

There are just some things that would take too much eggnog to explain.

Also worth noting is that, while certainly brilliant as the most popular novelty gift of 1999, some performers are better left as soloists rather than being nailed to the wall with a bunch of like-minded gamefish and subsequently expected to sing in unison to somehow align precisely with how this same exact scenario had played out in my dreams! But alas, much like children hopped up on sugar cookies and the promise of toys delivered by a fat man in a suit, getting all of these fish to sing in sync (…not to be confused with *NSYNC!) was a task too tall for these fish to fancy, thus filling my office with a sound that I wouldn’t necessarily call magical…

…but at least it was amusing!

Because seriously, how often is it that one gets so many singing fish all schooled together in one place, anyways – especially during the busy holiday season?!

By the end of our brief, bass-tastical Christmas performance that featured a bizarre mash-up of Jingle Bells and Up On the Housetop and ‘Twas the Night Before Christmas all at the same time, I knew that it was time to say goodbye and send my newfound fishy friends upon their merry way, for there were a lot of miles for them all to cover – courtesy of the US Postal Service – and on top of that, my wife was going to be home any minute!

As I wrapped every last fish, save but one that I kept for myself, I could hear their poetic melodies beckoning forth Santa and his reindeer to deliver presents and treats and worms and whatever else animatronic bass eat, their songs echoing through the chilly, December sky like a band of alcoholics that were mistakenly given access to entirely too much eggnog…