Living in a Pumpkin Spice World 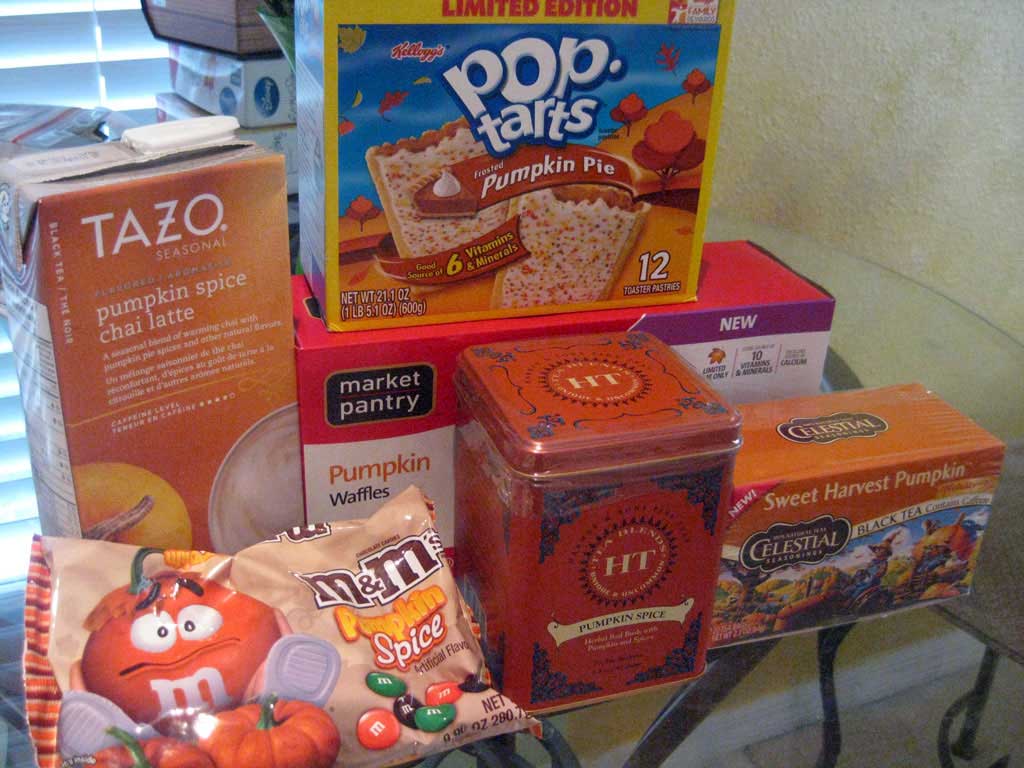 There are two kinds of people in this world – those who look forward to the coming of autumn with a wild anticipation for all of the breathtakingly amazing treasures and treats to be graced with the undeniably decadent flavor of sweet, sweet pumpkin, and crazy people.

And I, for one, am not a crazy people!

Many of you know by now that I tend to take this pumpkin thing pretty seriously, to the point where for a solid three months my palate pretty much all but assaulted by pumpkin provisions of just about every nature and consistency you can imagine. Seriously, I can’t even walk into a gas station without being confronted by pumpkin slurpees and pumpkin chewing tobacco – it’s almost as much of a burden as it is a blessing to have this bizarre fascination with pumpkin products, but as our beloved pumpkin season does in fact only come once a year, sometimes you just have to burrow down into that pumpkin bread pudding and make the best of it for the good of humanity…

At least that’s what I tell myself after my fourteenth variation of pumpkin bread that makes me want to swear off all grain products for the remainder of my existence!

It’s sometimes funny to think, though, that as much as I do intentionally inundate myself with pumpkin delicacies at every restaurant table and grocery store aisle that I encounter each fall, I still manage to come across all sorts of new stuff each year that I haven’t previously found pumpkin-ized in the years before. For example, it wasn’t until this year that I randomly stumbled across Pumpkin Spice Chex Mix – an immediate delight because I also happen to have a bit of a thing for Chex Mix, particularly around the holidays! I also recently discovered the ever-delectable and dentist-angering Pumpkin Spice Krispy Kreme Doughnuts, which between you and me didn’t really taste much like pumpkin, but I’m still not the type of guy to kick a Krispy Kreme donut out of bed at night, if you know what I’m saying!

Likewise, one brand that I’m still a little shocked to see missing our merry, pumpkin spice bandwagon has always been Oreo cookies – surprising because with flavors like watermelon and lemon twist and even candy corn, it’s got to be only a matter of time before pumpkin manages to creep its way into the Oreo cookie factory and take its hold. I mean, really, if somebody has already seen fit to give us Gourmet Pumpkin Dog Treats, the least they can do is also grand us our Pumpkin Oreos.

I know that there are some people who absolutely loathe this time of year, casting a hex on every last person who walks out of Starbucks carrying a Pumpkin Spice Latte and noisily rolling their eyes when asked if they’d like to try a slice of The Cheesecake Factory’s life-altering Pumpkin Cheesecake for dessert. They believe that our regularly scheduled annual pumpkin festivities should begin at jack ‘o lantern carving and end a month later at pumpkin pie with only a few random decorative gourds in between for color, which is why I’ve gathered here this week to tell you:

There’s no sense in fighting it. Resistance is futile.

Pumpkin spice preferences are here to stay and judging by our consistent growth rate maintained over the last five years, it’ll only be another decade or so before every season becomes pumpkin season and soon you’ll have no choice but to savor every last bite of that delectable pumpkin cheesecake after a hearty meal of pumpkin raviolis with a side of spicy pumpkin thai soup, with a refreshing quaff of sweet pumpkin juice shared among friends at your dinner table.

You may think that pumpkin this and pumpkin that is trite and unnecessary now, but you ain’t seen nothing yet. When The Great Pumpkin finally rises from the thorns of the local pumpkin patch and envelops every last man, woman, and child in its warm, orange glow, all anti-pumpkin sins and grievances will be forgotten as we welcome in The Year of the Pumpkin that promises to last for all eternity.

…or at least until candy cane and gingerbread season is here, of course!