It’s Not Just a Box, It’s a “Storage System”

I like to think that I’m not what you would call a “sucker,” and yet why do people feel the need to keep testing me?

Ok, I can tell already that this one is going to require a bit of elaboration…

For starters, I’ve always been a big fan of The Bradford Exchange – you know, that company who always fills your mailbox with all sorts of fliers and catalogs touting porcelain figurines and all sorts of nature-related knick-knacks featuring songbirds and fawns and other assorted woodland creatures. Well, that’s not to say that my home is filled with decorative plates covered in robins and bluebirds, but being the fan of the sea and its inhabitants that I am, I have managed to amass a collection of coral reef sculptures throughout the last couple of years that I think are actually pretty cool.

Anyways, being even an infrequent customer, I get even more catalogs in the mail than you people who don’t willingly express interest probably do, which is fine because every now and then I do admittedly come across something actually worth sending them a monthly payment for. In this latest caper, my prize just so happened to be a collection of ocean-themed Christmas ornaments featuring the likeness of dolphins in various scenes. The set was to be delivered in installments, as many of The Bradford Exchange’s collections often are, with a new ornament arriving each month right up until Christmas.

What did I say about judging me?!

Well, just for the record, my fiancée just so happens to have a thing for dolphins, so the set was intended as a gift for her, and that’s actually not even close to my irritation at hand. Each and every one of those overpriced, so-fragile-you’re-afraid-to-unwrap-them pieces came delivered just as promised and they’re all incredibly detailed. No, my conundrum didn’t come in the ornaments themselves, but in something else that appeared on my doorstep shortly after the final edition had arrived.

I present to you, ladies and gentlemen of the Court, Exhibit A: 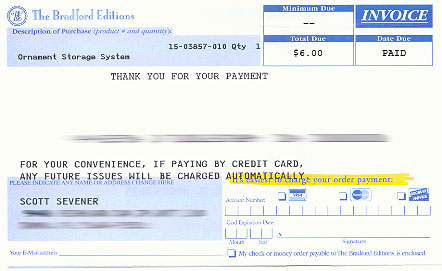 It took me a while and a bit of examination for me to really figure out exactly what the difference is between a cardboard box and an Ornament Storage System, but I finally was able to determine that what sets the two apart is the complex system of dividers (read: smaller sheets of cardboard) that was also included with said box. So here I was, getting all bent out of shape, thinking that my beloved Bradford Exchange was taking advantage of me, when in truth they were actually looking out for me by also supplying a protective housing in which to store my fiancee’s new collection of dolphin-y holiday fun.

Sure, I could’ve picked something up at Wal-Mart for probably the same or cheaper – a container of sorts that’s made of plastic that won’t crumple like an accordion when anything of the slightest weight is set on it, but really, it’s all about quality and convenience, and The Bradford Exchange knows this. If you find yourself in the market for not just a box, but a complete, all-in-one storage system, operators are standing by…