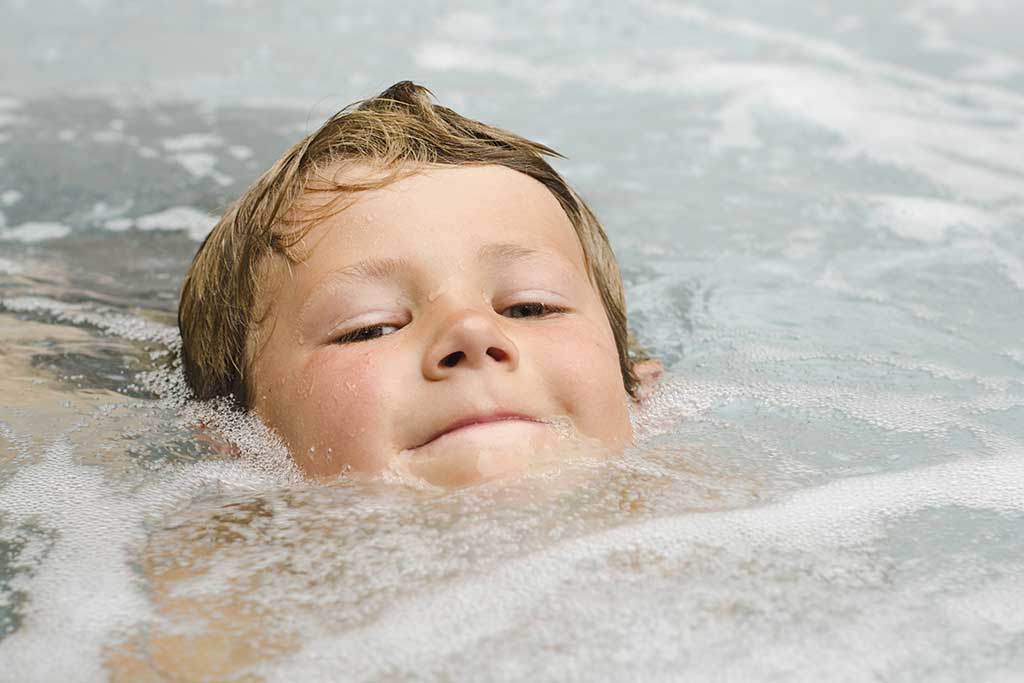 People on the Internet think that they know everything … myself included, but that’s an entirely different issue altogether!

This week while my wife was at work – the best time for questionable parenting and general mischief, I’ve found – I decided to treat my kid to his first dip in our hot tub. Not only because I myself was long overdue for a nice, relaxing soak, but also to show him that it’s in fact good for more than just splashing his hands in when he sneaks outside and around the pool fence like he’s not supposed to.

Of course like most anything in my daily life, before heading out I made the mistake of consulting the Internet to see if there was anything I needed to be concerned about … you know, like to heed rogue alligators out for a late night swim themselves or perhaps those important instructions like to not bring the kid’s bubble bath out for our little excursion with us!

Which by the way for any other dads reading this is an honest mistake because who wouldn’t want to kill two baths with one stone all while enjoying a nice, cold beer as the kid plays at the same time?!

As I found out, however it seems that the Internet at large did indeed have many opinions about tossing toddlers into hot tubs, all of which could basically be distilled down to “Don’t … he’ll die!!!” Which between you and me seemed just a little dramatic because if there’s one thing that I’ve picked up on during my last two years of parenting, it’s that kids tend to be pretty durable. Not every scratch or scrape deserves a trip to the ER or a drive to the cryopreservation center to put the kid on ice until science can discover a cure for his latest ouchy…

But because Mommy bloggers tend to be, as I’ve personally observed, insane, here’s a fun sampling of the warnings that I encountered in my five minutes of Googling before throwing caution to the wind and taking my kid in the hot tub with me anyways:

…if I were crazy enough to put my child anywhere near water without a swim diaper, which I’m not!

I also read an article by the Association for People Who Sell Hot Tubs, But Don’t Warrant Any Fun Being Had in Them Whatsoever or something that kids should be at least four years old before even taking swimming lessons at all! Do these people know that for the first nine months of their existence, kids are basically taking swim class inside of their mother’s womb 24 hours a day, 7 days a week until they’re actually born?! Granted, from my understanding it’s more of a focus on snorkeling at that point in their personal development, but still…

The solution, according to The Mommies of the Internet, was simple. Our hot tub adventure could be made safe if we either A) waited 4 – 12 years until he’s of an appropriate age for such adult recreational activities, or B) if I both turned down the heater and turned the jets off completely … essentially creating the necessary no-fun environment equivalent to regular, old bathtime, but with colder water – then, and only then, could we both safely submerse without the fear of boiling, broiling, or otherwise baking my darling, little baby boy to an unsavory crisp.

So with all of that newfound knowledge taken into careful consideration, after intensely debating all of the pros and cons while this veritable pit of hot, bubbly death stewed welcomingly just outside our backdoor, in the eleventh hour I made the decision … that we were totally going in anyways, and we ended up being just fine.

We didn’t even need the carrots and celery that I hid near the side of the hot tub just in case, and I only had to fish my son out of the jet intake three or four times, which given all of the warnings seems like a pretty big win in my book!

In the wake of our impressive success, I briefly considered leaving a comment for some of the Mommy bloggers to let them know that we had just proven all of their worst hot tub perils indubitably false … but then five minutes of Googling suggested that could actually be even more dangerous than taking my kid in the hot tub in the first place…