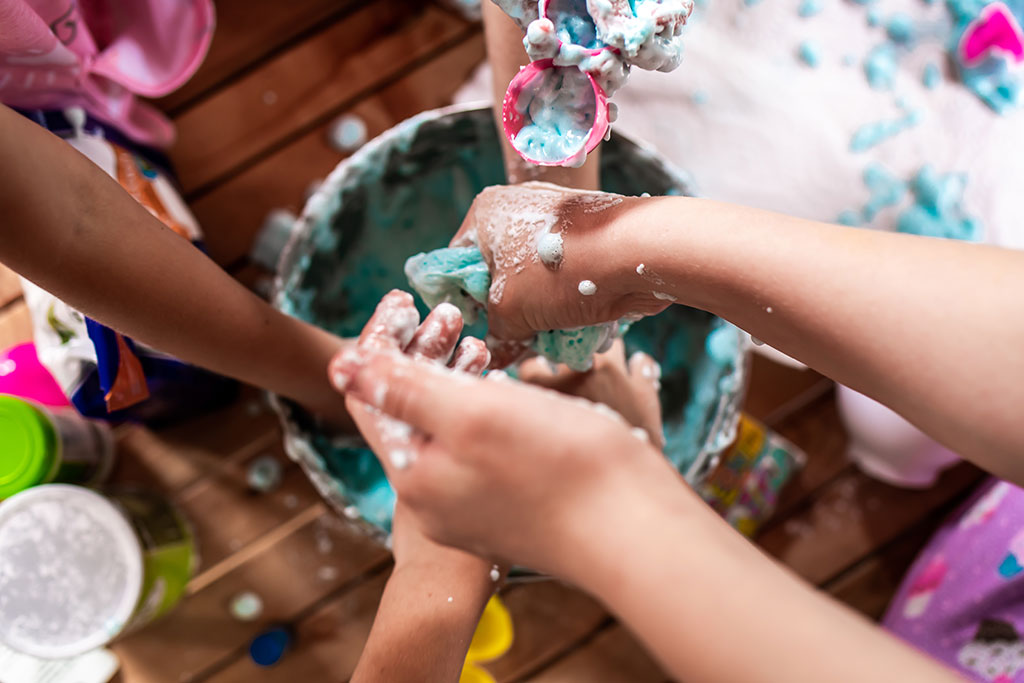 My kids don’t know the meaning of the phrase, “We have to stay six feet away from other people.”

Or, “Please cover your mouth when you cough, and get your fingers out of your nose…”

And especially not, “You can’t just touch everything in the store – people are getting sick!”

I don’t think the rules for this global pandemic were written with preschoolers in mind because at a time when grocery stores have lines of tape down in six-foot intervals at the checkouts and enough people are wearing masks that one of them could easily rob the store and then just proceed to go on about their shopping without any suspicion, telling my kids not to lick the shopping carts even though the lady at the door said that she’d just cleaned them isn’t even the most challenging part of my day in all of this.

Not by a long shot!

Back at home, my house looks like Wrestlemania 2020 is perpetually taking place just beyond the front door and despite allegedly being one of two adults who are supposed to be “in charge” of this three ring circus, the best I can do is warn you that at any moment you might get hit in the head with a chair or lose a foot stepping on a pile of Legos or find a few ounces of strawberry yogurt deposited in the bottom of your purse at one point or another during your visit.

You can thank COVID-19 that we’re not currently taking visitors!

There’s a saying – “The inmates have taken over the asylum…” – and I used to think that this applied, but then I realized that inmates at an asylum would surely get the hose turned on them if they were to act as loud as my boys get when they’re taking the dog for a walk around the house by her neck or they’ve turned my couch into the world’s comfiest trampoline.

Boy, what I wouldn’t do for just a few hours of pure, unadulterated boredom like I used to enjoy before I had kids … those were the days!

Thankfully, those kids now have fourteen conference calls a day to keep them busy in the name of e-learning … though I’ve already had to remind my oldest son that everyone else can see him in the video chat when he was sitting upside down in his chair with his crotch centered prominently in the middle of his webcam…

And here other businesses new to remote work are reminding their employees to wear shirts if they’re going to be on video chat!

I think both the blessing and the curse of this whole situation is being isolated around our families all. day. long. Because normally I’d see my kids for maybe an hour before dropping them off at school and then possibly a few hours in the afternoon or even less if I stayed at work and my wife picked them up instead.

Now it’s all kids, all the time! And if Wild and Crazy Kids wasn’t already the name of a beloved Nickelodeon game show for kids from the ’90s, that would be an accurate way to describe what happens within these four walls from the moment I wake up until 8:01pm when they’re forced back into their chambers to slumber for another night.

Actually, strike that – sometimes the crazy begins before I even wake up because oh boy, can kids do some crazy things while their supervision is unassumingly fast asleep!

Have you ever tried to get red icing – like what you would decorate cookies with – out of white carpet???

It’s kind of like red paint, which was actually a completely separate early morning activity that we discovered a few days earlier, to the point where I’m honestly not even sure which stain is which anymore…

I’m sure when this is all over, I’ll look back at these crazy times and miss begging my kids to stop sitting in the dog’s water bowl or to get their dirty feet off the walls for 12 – 14 hours a day non-stop when they’re back under the taxpayer-funded supervision of their teachers … who aren’t paid NEARLY ENOUGH to deal with this stuff … while I go back to working quietly at my desk with my headphones on and a feeling of calm washing over my body like a gentle tide.

This too shall pass. Paint and icing stained carpets can be replaced, and I was a fool for still having that glass vase of flowers on my dining room table anyways…