The Cooler in the Crawl Space 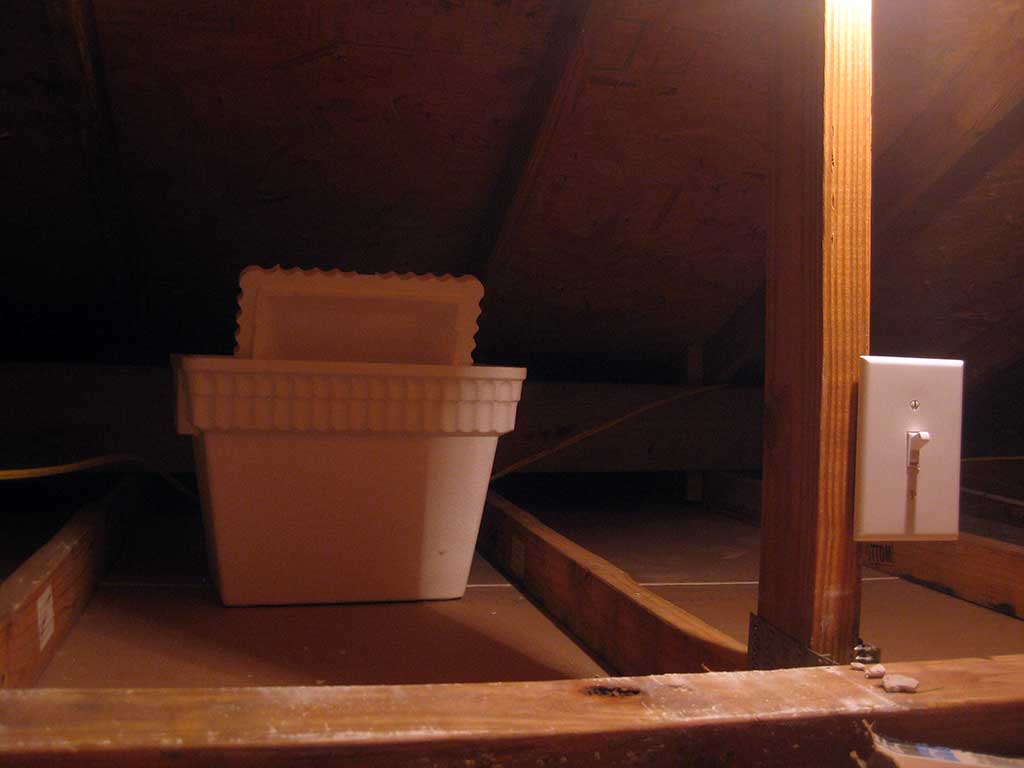 There are plenty of normal things I fully would’ve expected to discover in that attic – boxes of random junk left behind by the previous owner, bats, or maybe even a homeless person who had managed to take refuge in the ceiling of my garage, sneaking down in the dark of night to find food before scuttling back into hiding just before the stroke of noon when I finally crawled out of bed myself…

But I didn’t find any of those things – things that would have been perfectly normal and not at all creepy to uncover after living somewhere for two whole years before ever venturing up into the dark bowels of its mysterious crawl space up above.

Instead, as I stood on my rickety ladder peeking through the opening, flashlight darting nervously around like a member of Mystery Incorporated, I saw only a lone Styrofoam cooler left conspicuously in the corner … no other signs of random junk and/or bats to be found.

Honestly, I think I would’ve rather found the bats.

No one knew why it was there, or what it had been used for. It was just sort of … there, like a murder weapon carelessly left behind when its owner moved on for fresh blood. Because really, who leaves a disposable cooler behind – especially when garbage gets conveniently picked up here in suburbia twice a week – unless it’s the kind of item that’s too sensitive to get hauled to the local dump, where it’s likely to pass several hands along the way, at least one of which is likely to pipe up and say, “Hey, this looks like a murder cooler – we should probably take this to the police!”

And so instead this axe murderer, or chainsaw murderer, or filet knife murderer left behind the receptacle that he used to gather the organs of his victims in my attic where he assumed that it would likely never be found because let’s be honest, attics are scary places and the only reason *I* even dared to climb up that ladder is because I needed a place to stash some of my own junk that was definitely not murder-related at all…

Now sure, the foam cooler that I found wasn’t necessarily covered with dry blood and it didn’t exactly smell of the dank remains of dozens of victims come and gone through its tenure, but I think I know a cooler that’s been used to facilitate the spilling of innocent blood and the storage and eventual disposal of hundreds of victims when I see one. Maybe our crawl space killer remembered to bleach the thing out good after his last murder spree, but had to make a run for it and accidentally left his body cooler behind after stashing it in the attic so that his mother-in-law wouldn’t find it when she unexpectedly pops in like she always seems to do.

Or maybe he actually did the bulk of his killing in my attic and all I noticed was just the cooler because it’s very dark up there and I’m afraid to go past the opening for fear of taking a wrong step and plunging through the ceiling, thus creating a gigantic hole that we all can agree that I for one am far too lazy to ever get around to patching up myself.

If only one thing is certain, however, it’s that finding a disposable, Styrofoam cooler in your attic is not anywhere in the vicinity of normal, and if any of you had discovered this lone, hair-raisingly suspicious vessel for keeping things cold and fresh – whether those things be cold cuts and cans of beer or the hands and arms of a murderer’s victims – you would likely come to the same conclusions that I have here today about just how much blood that one medium-sized foam cooler has actually seen, not to mention what it might do to your property values because there’s no way in hell you’re climbing up there to retrieve it after concocting some crazy story like this about it being used by A MURDERER there in your very own attic!

So that said, if anyone needs a foam cooler – gently used, probably – I can make you a hell of a deal on one that I recently found in my crawl space.

In fact, if you’re willing to shimmy up there yourself to get it, you can just have it!